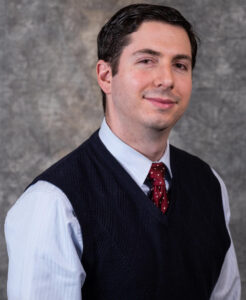 David J. Puglia, Ph.D., is Associate Professor and Deputy Chairperson in the English Department at Bronx Community College of The City University of New York, where he teaches courses in folklore, children’s literature, popular culture, and writing.

He is the author or editor of four books: North American Monsters: A Contemporary Legend Casebook (2022, winner of Brian McConnell Book Award), Tradition, Urban Identity, and the Baltimore “Hon”: The Folk in the City (2018, cited by the BBC), Maryland Legends: Folklore from the Old Line State (2014, with co-author Trevor J. Blank), and South Central Pennsylvania Legends and Lore (2012). His essays have appeared in the Folklore Historian, New Directions in Folklore, Contemporary Legend, Children’s Folklore Review, and Digest, and he has contributed chapters to the Oxford Handbook of American Folklore and Folklife Studies, What Folklorists Do, Supernatural Cities, Youth Cultures in America, and The Encyclopedia of American Studies. He also works behind the scenes as a consultant on legend research and writing for filmmakers, publishers, and cultural organizations.

He is the current co-editor of Contemporary Legend, the past editor of New Directions in Folklore, and a member of the editorial boards of Voices: The Journal of New York Folklore, Supernatural Studies, and New Directions in Folklore and the Aesop Prize committee of the American Folklore Society’s Children’s Folklore Section. He previously served as president of the Middle Atlantic Folklife Association and as a member of the Executive Council of the International Society for Contemporary Legend Research.

He lives in New York with his wife Mira (also a folklorist) and their son Zane.

This entry is licensed under a Creative Commons Attribution-NonCommercial-NoDerivatives 4.0 International license.

Need help with the Commons? Visit our
help page Send us a message

Built with WordPress Protected by Akismet Powered by CUNY